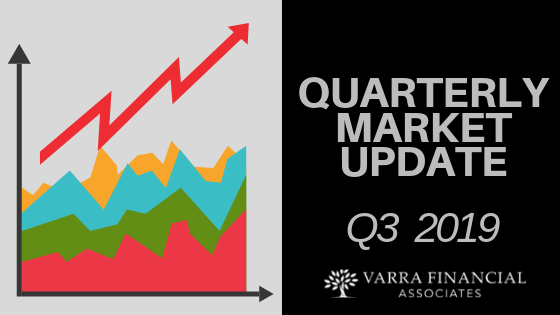 In this Q3 recap: the U.S. and China intensify their trade dispute, but agree to negotiate again, the Federal Reserve cuts short-term interest rates once more, and stocks ride through some volatility to end the summer higher.

THE QUARTER IN BRIEF

Summer doldrums? Not exactly. The third quarter brought a number of attention-getting events, and while investors took some cues from them in the short term, Wall Street’s confidence remained – the S&P 500 rose 1.19% in Q3. The abrupt devaluation of the Chinese yuan shocked traders, and shifting Treasury yields also made headlines. Trade negotiations between the U.S. and China broke down, but as the quarter ended, it looked like they would resume in the fall. Manufacturing was giving mixed signals, both here and abroad, breeding concerns about the health of the global economy. Both the Federal Reserve and the European Central Bank took steps to ease monetary policy.1

Wall Street and Main Street had plenty to think about in the quarter. Trade remained the big issue, with China and the U.S. amplifying their ongoing dispute. On August 1, the U.S. announced tariffs on an additional $300 billion of Chinese products – some would be effective September 1; others, effective by December 15. Four days later, China devalued its main currency, the yuan, to a level unseen in 11 years – a move that immediately sent U.S. stocks 3% lower. (Devaluing the yuan made Chinese goods cheaper for buyers paying for them in dollars, effectively offsetting the impact of U.S. tariffs.)2,3

On August 23, China unveiled a plan to put new tariffs on $75 billion of U.S. goods, threatening to place import taxes as high as 43% on cars and trucks exported from America. Just hours later, the White House announced that current and planned tariffs on Chinese goods would increase by 5%. September was less acrimonious: China stated that it would remove 16 U.S. products from its tariff list, and the White House said that it would delay the new tariffs on Chinese goods planned for October 1 until October 15. Late in the month, word came that trade representatives from both nations would resume talks on October 10.2,4

On August 15, traders took note of another development: the yield of the 2-year Treasury bond exceeded the yield of the 10-year Treasury bond for the first time since 2007. In past years, this has sometimes signaled an oncoming interruption in U.S. economic expansion. Longer-term Treasuries commonly have higher yields than shorter-term Treasuries; when the opposite is true, it indicates that domestic and foreign investors have less optimism in their economic outlook. (Bond yields often fall when bond prices rise, and vice versa.)5

The Federal Reserve lowered the country’s short-term interest rate by a quarter-point on September 18, to a range of 1.75% to 2.00%. Federal Reserve Chairman Jerome Powell, speaking to the media after the decision, called the outlook for the U.S. economy “favorable.” At the same time, he noted “a lot of uncertainty” surrounding the near-term economy and the Fed’s monetary policy views. An updated dot-plot forecast came with the latest policy statement; the Fed uses this tool to try and project the cost of borrowing money in the future, i.e., where the benchmark interest rate may be. The dot-plot showed that while seven Fed officials thought at least one more interest rate cut would happen before 2020 arrived, ten others did not.6

Fundamental indicators were a mixed bag. Employers hired 130,000 net new workers in August, according to the Department of Labor; that was a drop from July job creation levels, and it reduced the monthly average for 2019 to 158,000. In both July and August, unemployment was at 3.7%; the U-6 rate, which counts the underemployed and unemployed, was at 7.0% in July, 7.2% a month later. U.S. manufacturing activity also slowed in both August and September, according to the Institute for Supply Management; the September slowdown was the sharpest monthly contraction since June 2009.7,8

Consumer spending rose by 0.5% in July, then just 0.1% in August, according to the Bureau of Economic Analysis. Retail sales were up 0.8% in July and another 0.4% a month later. (The BEA also concluded that the economy had grown 2.0% in the second quarter.) Consumer prices were advancing at 1.7% annually through August.9

The Conference Board’s Consumer Confidence Index rose to a (revised) mark of 135.8 in the quarter, but fell to 125.1 in its final Q3 reading (September). The University of Michigan’s Consumer Sentiment Index was at 98.4 in July, but 93.2 by September.10,11

Factory activity slowed in some of the world’s larger economies. By September, the Markit factory purchasing manager indices (PMIs) for the euro area, the United Kingdom, Russia, Mexico, Germany, and Japan were all under 50, meaning the manufacturing sectors in those economies were shrinking rather than growing. There was also a positive development, however: the JPMorgan Global Manufacturing PMI rose twice, to 49.5 in August and 49.7 in September.12,13

The European Central Bank made two moves in the quarter to try and stimulate the euro area economy. The ECB took its overnight deposit rate to a record low of -0.5%, and it also announced another round of monetary stimulus, stating it would buy €20 billion in bonds per month, beginning in November. Lawmakers in the United Kingdom continued to argue over the path toward Brexit; in August, new Prime Minister Boris Johnson moved to suspend Parliament for several weeks in September and October, a move ruled unconstitutional a month later by the country’s highest court. Johnson refused to resign despite pressure to do so. He claimed the U.K. would make its Brexit from the European Union by October 31, as scheduled, though some analysts worried that it might be a “hard” one, with no trade deal with the E.U. in place.14,15

China’s industrial output faltered in the quarter. It slowed to a 4.8% pace in July, which became 4.4% in August. Both numbers were 17-year lows. Year-over-year retail sales had grown by 7.5% through August, also representing a decline. The People’s Bank of China enacted some strategies in Q3 in response to this disappointing data. Besides devaluing the yuan, China reduced capital reserve requirements for its banks in the quarter and set new, pro-growth standards for commercial lending.16

In the big picture, the developed markets outgained the emerging ones. The MSCI EAFE index, a benchmark for developed equity markets in Europe and the Asia-Pacific region, improved 3.7% in the quarter; MSCI’s Emerging Markets index rose just 0.6%.17

Drones attacked two large Saudi Arabian oil facilities on September 15, interrupting about 5% of global oil production. West Texas Intermediate crude oil closed at $62.90 on the New York Mercantile Exchange the next day, taking a 14.7% leap. This was oil’s biggest one-day advance in 11 years. The price eventually fell: WTI crude closed out the quarter at $54.20 a barrel.18,19

Home buying picked up in the quarter. The National Association of Realtors noted that a 2.5% advance for existing home sales in July and a 1.3% gain for August. Its pending home sales index, down 2.5% in July, reversed course and rose 1.6% a month later. New home sales represent only a sliver of the residential real estate market by comparison, but it is worth noting that Census Bureau data showed new home buying rebounding – down 8.6% in July, then up 7.1% for August. Yearly home price appreciation slowed: the 20-city S&P/Case-Shiller home price index saw a 2.0% annualized increase through July and was flat for that month.9

30-year and 15-year fixed rate mortgages are conventional home loans generally featuring a limit of $484,350 ($726,525 in high-cost areas) that meet the lending requirements of Fannie Mae and Freddie Mac, but they are not mortgages guaranteed or insured by any government agency. Private mortgage insurance, or PMI, is required for any conventional loan with less than a 20% down payment.

Construction activity also increased during the summer. Building permits, as tracked by the Census Bureau, rose 8.4% in July and another 7.7% in August; housing starts, down 1.5% in July, surged 12.3% in August.9

In a statistical coincidence, the Dow Jones Industrial Average and S&P 500 gained the same percentage in the quarter. The Dow settled at 26,916.83 on September 30; the S&P, at 2,976.74. Both indices registered their third straight quarterly advance. The Nasdaq Composite went sideways for Q3, ending September at 7,999.34.22,23

Investors may recall this past quarter as volatile, but that was not always the case: in September, the S&P did not have a single 1% daily loss, and it saw just two daily gains of 1% or more.22

The Dow, Nasdaq, and S&P each entered the fourth quarter with year-to-date gains of at least 15%. Can that kind of momentum continue? Much could depend on corporate earnings and the guidance that accompanies them. Tariffs imposed by the U.S. and China are not the only potential drag on profits; dollar strength has to be counted as well. The coming earnings season is expected to be watched closely on Wall Street, and while it might not exactly dictate what happens in the market this month or this quarter, it could set a mood that investors might retain through the end of the year.

Sources: barrons.com, barchart.com, treasury.gov - 9/30/1922,24,25
Indices are unmanaged, do not incur fees or expenses, and cannot be invested into directly. These returns do not include dividends. 10-year Treasury yield = projected return at maturity given expected inflation.

1-902237    This material was prepared by MarketingPro, Inc., and does not necessarily represent the views of the presenting party, nor their affiliates. The information herein has been derived from sources believed to be accurate. Please note - investing involves risk, and past performance is no guarantee of future results. Investments will fluctuate and when redeemed may be worth more or less than when originally invested. This information should not be construed as investment, tax or legal advice and may not be relied on for the purpose of avoiding any Federal tax penalty. This is neither a solicitation nor recommendation to purchase or sell any investment or insurance product or service, and should not be relied upon as such. All market indices discussed are unmanaged and are not illustrative of any particular investment. Indices do not incur management fees, costs and expenses, and cannot be invested into directly. All economic and performance data is historical and not indicative of future results. Additional risks are associated with international investing, such as currency fluctuations, political and economic instability and differences in accounting standards. This material represents an assessment of the market environment at a specific point in time and is not intended to be a forecast of future events, or a guarantee of future results. MarketingPro, Inc. is not affiliated with any person or firm that may be providing this information to you. The publisher is not engaged in rendering legal, accounting or other professional services. If assistance is needed, the reader is advised to engage the services of a competent professional.
.
CITATIONS:
1 - us.spindices.com/indices/equity/sp-500 [9/30/19]
2 - piie.com/blogs/trade-investment-policy-watch/trump-trade-war-china-date-guide [9/20/19]
3 - bloomberg.com/news/articles/2019-08-04/asia-stocks-set-to-drop-with-trade-back-in-focus-markets-wrap [8/5/19]
4 - cnbc.com/2019/09/30/us-stocks-investors-monitor-us-china-trade-impeachment-inquiry.html [9/30/19]
5 - bloomberg.com/graphics/2019-yield-curve-inversions/ [8/15/19]
6 - reuters.com/article/us-usa-fed/fed-cuts-rates-on-7-3-vote-gives-mixed-signals-on-next-move-idUSKBN1W32H7 [9/18/19]
7 - bloomberg.com/news/articles/2019-09-06/u-s-payrolls-rise-130-000-boosted-by-25-000-for-census-count [9/6/19]
8 - tradingeconomics.com/united-states/business-confidence [9/3/19]
9 - investing.com/economic-calendar [9/30/19]
10 - investing.com/economic-calendar/cb-consumer-confidence-48 [10/2/19]
11 - tradingeconomics.com/united-states/consumer-confidence [10/2/19]
12 - tradingeconomics.com/country-list/manufacturing-pmi [10/1/19]
13 - markiteconomics.com/Public/Home/PressRelease/6d5ffb41584d4c08a54706d85d3580b3 [10/1/19]
14 - tinyurl.com/y69hktvl [9/12/19]
15 - tinyurl.com/y53dzoy5 [9/24/19]
16 - cnn.com/2019/09/16/economy/china-economy-industrial-production/index.html [9/16/19]
17 - content.rwbaird.com/RWB/Content/PDF/Insights/Quarterly-Market-Chart-Book.pdf [9/30/19]
18 - marketwatch.com/story/us-oils-10-surge-after-saudi-attack-puts-it-on-track-for-the-biggest-daily-gain-in-312-years-2019-09-15 [9/16/19]
19 - money.cnn.com/data/commodities/ [9/30/19]
20 - barchart.com/futures/performance-leaders?viewName=chart&timeFrame=3m [9/30/19]
21 - freddiemac.com/pmms/archive.html [10/1/19]
22 - tinyurl.com/y5bk99pm [9/30/19]
23 - marketwatch.com/investing/index/comp/historical [10/1/19]
24 - barchart.com/stocks/indices?viewName=performance [9/30/19]
25 - treasury.gov/resource-center/data-chart-center/interest-rates/Pages/TextView.aspx?data=yieldAll [10/1/19]