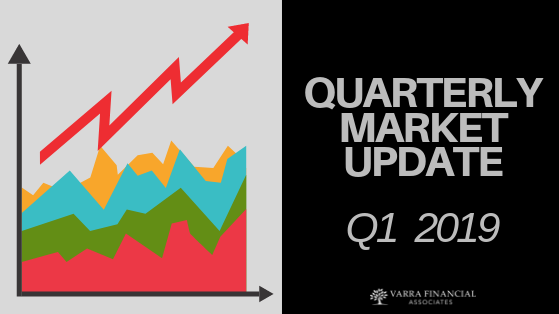 In this Q1 recap: the Federal Reserve alters its outlook, the truce in the trade dispute holds, the real estate market strengthens, and stocks make an impressive comeback from Q4, even as growth concerns mount.

THE QUARTER IN BRIEF
The strongest first quarter for stocks in 21 years featured all kinds of news. Central banks revised their outlook on monetary policy, seeing less robust economies in 2019. Faint glimmers of progress emerged in the U.S.-China trade dispute. Concerns over near-term corporate earnings and bond yields grew. The possibility of a “hard” Brexit loomed in Europe. The real estate market showed signs of heating up again. As the closing bell rang on the last trading day of March, the Standard and Poor’s 500 notched a 13% gain for the first three months of the year.1

DOMESTIC ECONOMIC HEALTH
Late last year, the Federal Reserve was forecasting two interest rate hikes for 2019 and maintaining a fairly hawkish outlook. On March 20, the central bank veered away from all that. It cut its 2019 growth forecast for the economy by 0.2% to 2.1%, indicated it would not raise interest rates this year, and projected just one quarter-point hike through 2021. At a press conference immediately after the release of the March policy statement, Fed Chairman Jerome Powell shared his view that the “growth of economic activity has slowed,” but he added that Fed policymakers did not foresee a recession developing.2

The financial markets reacted swiftly. Demand for longer-term Treasury notes rose. By March 22, the yield on the 10-year Treasury had fallen dramatically, to the point where the yield on the 2-year Treasury exceeded it. (Bond yields fall when bond prices rise.) Economists refer to this as an inverted yield curve. Some economists see an inverted yield curve as a recession signal, while others disagree. The sudden flight to longer-term Treasuries did seem to reflect a lessening of risk appetite among institutional investors. Just six days after the Fed made its pivot, the CMEGroup’s FedWatch Tool, which tracks market expectations about interest rate changes, gave the Fed a 71.7% chance of making an interest rate cut by the end of the year.3,4

Some of the incoming data during the quarter seemed to correspond with the Fed’s revised assessment of the economy, but some did not. (Some was actually delayed as an effect of the federal government shutdown that carried into late January.)

Inflation pressure eased. In October, the Consumer Price Index showed a 2.5% annualized advance. By February, inflation was running at just 1.5%.5

Job creation surged, then fell off. There were 311,000 net new jobs in January, but just 20,000 in February. From January to February, though, the unemployment rate declined from 4.0% to 3.8%, and the broader U-6 rate, encompassing the underemployed, dropped from 8.1% to 7.3%. (The federal government shutdown may have affected some of the above numbers.)6

The quarter also ended with the Bureau of Economic Analysis downgrading fourth-quarter gross domestic product (GDP). The prior estimate was 2.6%; the revised estimate was 2.2%.7

One important consumer confidence gauge rose and fell during the quarter: the Conference Board’s index declined sharply to 124.1 in March, after hitting a 3-month peak of 131.4 in February. The University of Michigan’s consumer sentiment index performed better: it started the quarter with a drop of 7.1 points in January, but by late March, it was at 98.4, a tenth of a point above where it was in December.8,9

The Institute for Supply Management’s monthly purchasing manager index, following manufacturing activity, was nowhere near 60 (a level it reached last summer), but remained well above 50 (the mark delineating sector expansion from industry contraction). ISM’s manufacturing PMI was at 56.6 in January, 54.2 in February, and 55.3 in March.10

GLOBAL ECONOMIC HEALTH
Financial markets worldwide breathed a collective sigh of relief as the trade dispute between the U.S. and China eased. Negotiations between the two nations continued during the quarter, but no deal emerged. While some trade analysts see an agreement being reached in the second quarter, there are doubts that such an accord will resolve the issue at the center of the tariff fight – the concern that Chinese firms are using their technologies to steal U.S. intellectual property. In March, President Trump said that he would prefer leaving 25% tariffs on $50 billion of Chinese products in place, even if a new trade deal was forged.11

The quarter ended without a Brexit or even an accepted Brexit path – with the United Kingdom facing a potentially unpleasant outcome. The revised Brexit deal, which Prime Minister Theresa May brought to Parliament, was rejected for a third time in late March, raising the possibility of the U.K. leaving the European Union on April 12 without any kind of defined trade agreement. The European Central Bank surprised financial markets in early March with a decision to revive some of the economic stimulus measures it had recently ended, and it also indicated that would leave interest rates unchanged until at least 2020. The latest forecast from the Organization for Economic Cooperation and Development (OECD) projects only 1% growth for the eurozone this year and less than that for the economies of Germany, Japan, and the United Kingdom.12,13

REAL ESTATE
Is a buyer’s market returning? As the quarter ended, some real estate industry journalists and analysts wondered if that was the case. Existing home sales surged 11.8% in February, according to the National Association of Realtors. That was the largest monthly gain seen since December 2015. While residential resales were still down 1.8%, year-over-year, this latest NAR report was certainly encouraging. NAR chief economist Lawrence Yun cited “lower mortgage rates, more inventory, rising income, and higher consumer confidence” as contributing factors in the increase. Additionally, the Census Bureau said that the pace of new home buying improved 4.9% during February; economists surveyed by Reuters had forecast a 1.3% advance.18,19

As Yun noted, cheaper home loans factored in to all this. The decline in longer-term Treasury yields influenced mortgage rates. By the last week of March, a 30-year, fixed-rate mortgage was carrying an average interest rate of just 4.06%, according to the calculations of mortgage buyer Freddie Mac. Compare that with 4.95% as recently as November. (The 15-year, fixed-rate mortgage carried an average interest rate of just 3.57% as March ended.)20

Indices are unmanaged, do not incur fees or expenses, and cannot be invested into directly. These returns do not include dividends. 10-year Treasury yield = projected return on investment, expressed as a percentage, on the U.S. government’s 10-year bond.

Just as the bulls seemed beaten down, they came running right back. After diving nearly 14% in the last three months of 2018, the S&P 500 rebounded more than 13% in the opening quarter of 2019. While consumer spending is still strong, many analysts still see slightly less economic growth this year (between 2%-2.5%). Stock market analytics firm FactSet is now projecting 4% profit growth for S&P 500 firms in 2019; when 2018 ended, the projection was near 10%. Economies in Europe and China appear to be less robust, and that could put a drag on the revenue of S&P 500 companies, 40% of which comes from outside the U.S. An abrupt April Brexit could also be a negative for global equity markets. The financial markets showed great resilience in Q1, forcing some financial firms to reconsider their full-year outlook.1

If you would like to discuss updates on the market or have any other questions on financial topics, please contact us today.

This material was prepared by MarketingPro, Inc., and does not necessarily represent the views of the presenting party, nor their affiliates. The information herein has been derived from sources believed to be accurate. Please note - investing involves risk, and past performance is no guarantee of future results. Investments will fluctuate and when redeemed may be worth more or less than when originally invested. This information should not be construed as investment, tax or legal advice and may not be relied on for the purpose of avoiding any Federal tax penalty. This is neither a solicitation nor recommendation to purchase or sell any investment or insurance product or service, and should not be relied upon as such. All market indices discussed are unmanaged and are not illustrative of any particular investment. Indices do not incur management fees, costs, or expenses. Investors cannot invest directly in indices. All economic and performance data is historical and not indicative of future results.

Additional risks are associated with international investing, such as currency fluctuations, political and economic instability and differences in accounting standards. This material represents an assessment of the market environment at a specific point in time and is not intended to be a forecast of future events, or a guarantee of future results. MarketingPro, Inc. is not affiliated with any person or firm that may be providing this information to you. The publisher is not engaged in rendering legal, accounting or other professional services. If assistance is needed, the reader is advised to engage the services of a competent professional.